One Night in Paris

You've got one night to make the most of a Paris stag do. What do you do? That was the question I asked myself going into this blog post, which I've pulled together from a combination of personal experience and expert advice (read: stuff our stags told me). From champagne by the Seine to a big night at the Moulin Rouge, it's all here. Oh, and one thing you should never do in the City of Lights: drive. I once spent four hours trying to park a van as close to the Pont Neuf as I could get it. It took me an extra 40 minutes to walk back to the club we were playing in, and three hours to find the thing after the show?¦

Hey, this is Paris. You don't just go wine tasting, mes amis. You get involved with some proper Champagne. On a boat. On the Seine. Pre-party appetisers don't get much cooler than this.

I reckon you'd be hard pushed to find a better way to start your stag party.Our stags had a private saloon, and an hour on board a well-equipped boat heading up and down the famous river. They even got to try three different varieties of bubbles. C'est bien!

Wander through the streets of Pigalle and make a stop at La Fourmi. This cross between a classic old Parisian haunt and a modern bar is the beating heart of the city's trendiest district, where tourists and trendy Gallic dudes come to sink a couple of beers and pick up flyers for the best club nights in town.

Expect lo-fi DJ sets while you suck down a pastis and mingle with the coolest cats in Paris. If you want to, you can stay here all night on Friday or Saturday. 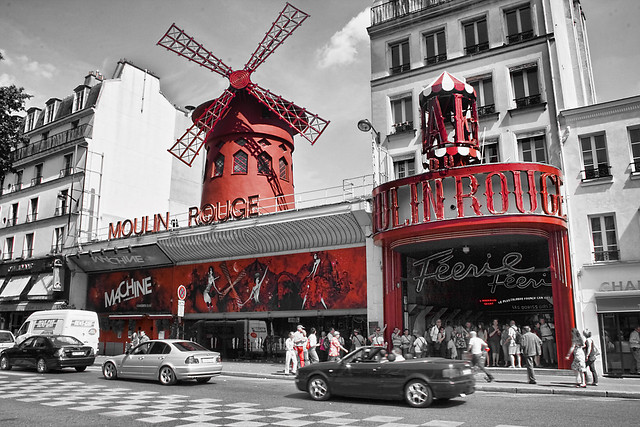 The club with the red windmill is still the most awesome place to have dinner in Paris, and possibly the world. Where else do you get to tuck into fine French cuisine, sink half a bottle of champagne per head and watch beautiful Doriss Girls high-kicking their way into a saucy pirate routine? Cliched it might be, but when cliches look like this I'll take a second helping.

Can't be bothered to leave the Moulin Rouge? Well, there's always the'Machine', a nightclub attached to the nightclub. Where the tourist venue is all leggy ladies and expensive cuts of meat, this place is three floors of modern loopiness complete with gig space and dancefloor. Its decor is best described as Hugo meets Blade and it's definitively packed with chic French kids. Expect indie music, experimental bands and hardcore DJ sets.

If you thought La Fourmi was cool, wait until you get a load of this! A two floor venue hosting all sorts of club nights, Le Divan du Monde presumably gets its name from the plush sofa-style upholstery on the walls. If you dig your bass big, check out a dub and reggae night. Irie.

The Rolling Stones used to play here when they came to Paris - so did The Beatles. Nowadays, the city's most raucous rock venue plays host to wild retro acts: think Jim Jones meets Elvis Presley. You can eat upstairs, and the mosh pit on Saturdays has to be seen to be believed.

We think we grabbed the best of a stag do in Paris but did I miss anything? Let the stags know on Facebook or Twitter!