How to win at poker

Getting the glad rags on for a stag do at the casino ? Arm yourself with our expert tips for a better chance of scooping that pot...

Most novice poker players lose money by playing hands they shouldn't be touching with a bargepole. The pros reckon you should keep a list of good and bad starting hands in your head. A starting hand is the cards you're dealt when you sit in on a pot, and because poker is a game of mathematical probabilities, the good ones are the cards most likely to lay the foundations of a winning flop.

The top five starting hands: two aces, two kings, two queens, ace and king, two jacks. If you get double aces, or a “pocket rocket” as it's known in the lingo, you stand a helluva chance of scooping the pot.

The five worst starting hands (fold immediately if you get any of these combos): 2 and 7, 2 and 8, 3 and 8, 2 and 6, 4 and 9. Basically, dealt hands that show these cards are knackered before they leave the starting gate. You'd have to get a ridiculously unlikely flop of consecutive cards to get low-scoring straights, and even then you'll probably be nailed by someone with a better hand.

Know when to bluff 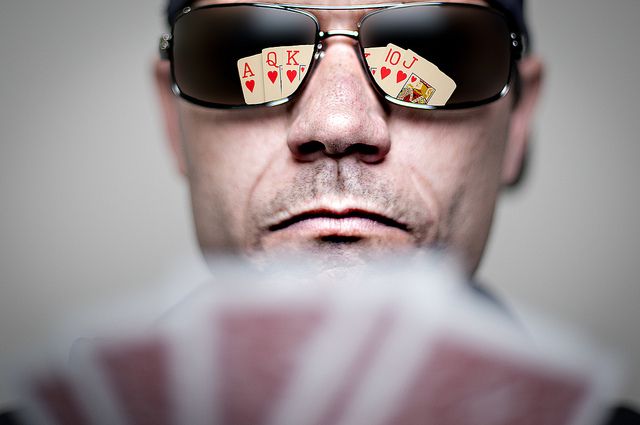 Lots of new poker players bluff indiscriminately, because “it's part of the game”. It is, but it only works if you know when to do it.

Bluffing is the art of betting on an inferior hand, so the key to its success is accurately predicting what everyone else at the table is going to do. Advanced bluffers are able to read “tells” - signs made by other players, which unconsciously give away the strength of their hands - but unless you're a seasoned card-jockey or a psychiatrist, this isn't likely to help you.

Follow these simple steps to increase your chances of bluffing successfully:

Don't bluff if you're the first person in a round of raises/folds. You can't begin to guess what everyone else has if you haven't had a chance to see them play.

Don't bluff if another player has a ton of money already in the pot.

Don't bluff if you are playing against a large number of people.

Poker is a game of maths, and you can't do sums with a bad head. The two enemies of cool-headed poker playing, tilt and steam, will bite you in the ass and make you lose money. They're defined below:

Tilt: making bad play decisions because your mental state has been upset (“tilted”) by your game situation. Common tilt situations for beginners include being beaten despite holding a good hand, being out-bluffed, or even winning. The point is you shouldn't let external influences change your cool as a cucumber attitude to the hand. Wear your poker face inside as well as out.

Steam: even worse than tilt. Like poker road rage. Don't go anywhere near a pot when you're boiling with barely suppressed anger at the injustice of a freak hand. You'll play wildly and lose all your money for sure.

Also: don't play drunk when you're playing against big-timers. Play drunk against every other fella in the stag do by all means, but don't expect to do a Cincinnati Kid on them...

Walk away from the pot

Just because you already put money in the pot, doesn't mean you have to keep filling it up. If you can't stand the heat, get out of the kitchen. Sticking more money in because you already threw down is just throwing good money after bad. And keeping hold of your cash means you get a chance to play a new hand...

Keeping an eagle eye on your opponents is the best way for a newbie to steal a few cheeky pots. While you're playing hands, you probably won't have enough concentration left to check out whether any of the other chaps have a tell when they bluff, or always folds at a certain point. But away from the action, when you've folded early (because you were listening to us when we talked about good and bad starting hands...), you'll have all the time in the world to build a picture of how everyone else is playing.

Armed with your knowledge, you can snatch the pot with a well-timed bluff. Bide your time, wait for the bride's brother to signal he's about to fold, and swoop in for the kill...

You can play poker at tons of top stag do locations, from Bournemouth to Las Vegas. Let us know where you've been - and what you won - on Facebook and Twitter!