Blokes on the Stag Do

Here at Stag Weekends, we organise a wide range of stag parties. No stag do is the same, but some of the characters you meet are! With that in mind we have put together a list of stereotypical characters you are likely to meet on a stag weekend... 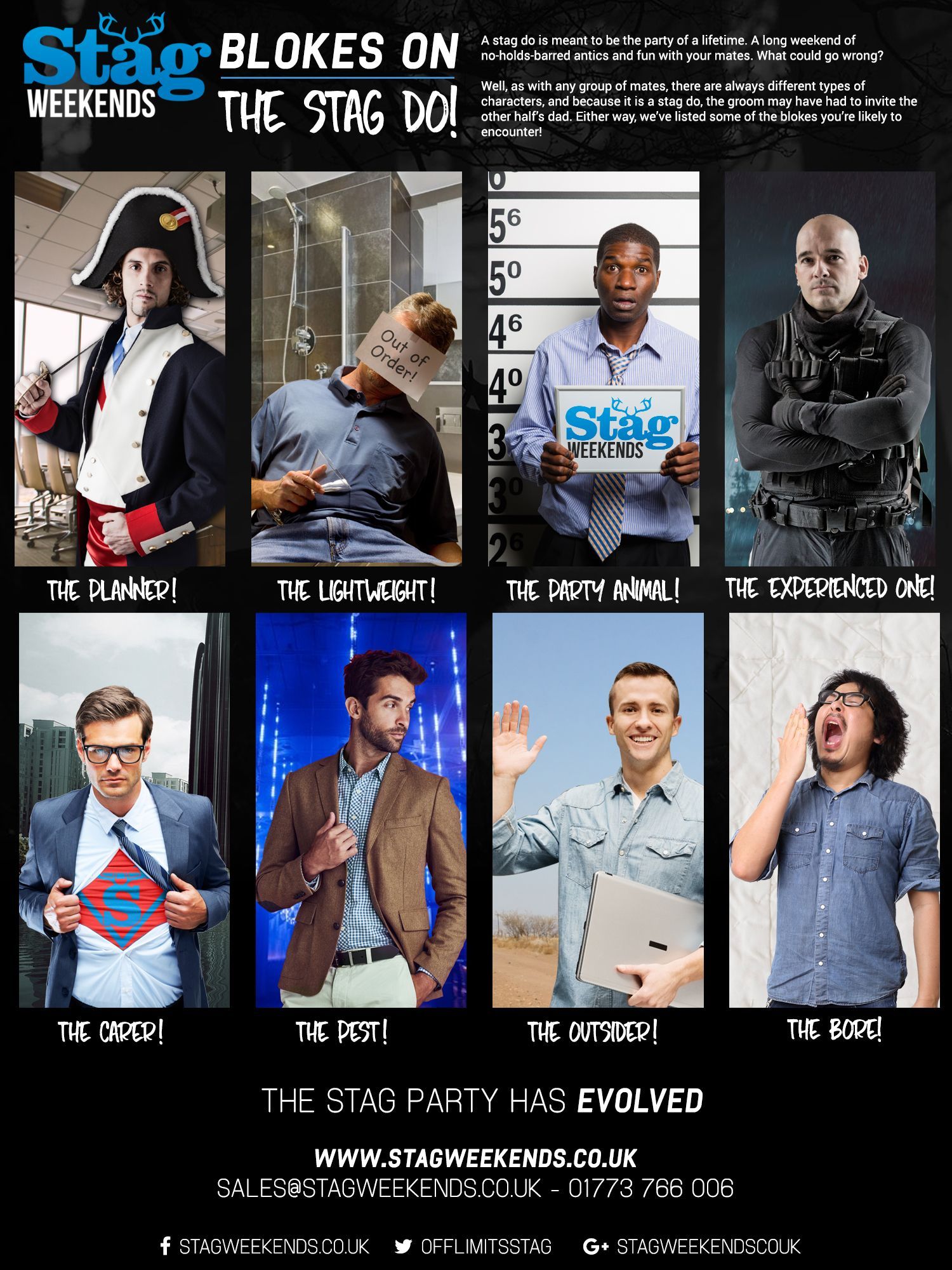 Likely to be the best man, this chap has organised everything from hotels to what you're having for tea. Whether he wanted to or not, due to his best man duties, he's had to organise the lot. This can lead to this member of the party being a bit of a stress head. He's got so much to worry about, he forgets to have fun himself and spends most of his time rallying the troops and forcing you to down your pint!

We've all got a mate that is a liability when it comes to a night out'the stag do is no different. He probably knows he can't keep up with everyone else's drinking pace, but still wants to try! By the time you get to the second bar, this bloke will be asking for water along with his drink and will need to chuck up after necking two jagerbombs at the last bar. No doubt someone will have to look after him.

This guy won't be too far away from'The Lightweight' throughout the course of the night. He's a sensible character who knows how to handle his alcohol intake. Don't let this fool you into thinking he doesn't have a good time'he does'he just doesn't get as wasted as others. It's for this reason that he will be responsible for important belongings such as room keys and walking'The Lightweight' home early.

So what if it's 10am? He's getting a round of shots in for the lads! This member of the group is most likely a single man who just wants to get smashed! He's full throttle and his idea of fun is getting hammered and running wild. They can handle their drink better than anyone else despite the amount they drink, but they can be an argumentative breed, so if anyone is going to get you kicked out of a club'it's him!

This bloke has been there, done it and seen it all. Likely to be an elder statesman, he's about to embark on his 56th stag party, no matter what activity you throw at him'he's done it. It's not a problem, though; he just loves a good time, which is why he's been on some many stag parties. Everyone else on the stag do looks up to this messiah who knows all of the tricks of the trade, i.e. lap dancing clubs and night clubs!

Just like'The Party Animal' he is more than likely be single'or at least likes to act like he is! A stag do says one thing to this bloke'women! He is going to spend the majority of his time trying to chat up women at the bar and on the dance floor. If you go to a strippers club, he'll be convinced that he has a chance of pulling one of the girls. At breakfast the next morning, he'll be telling you how many girls' numbers he got last night.

This bloke is only there because he has to be. He's not a member of the tight-knit friendship group, and is usually a family member or an old childhood friend you've not spoken to for six years. You'll see him stood on the periphery of the drinking circle, but he doesn't want to look like a party pooper so laughs at the right time and gets involved in the rounds.

This particular stag do goer is one to forget. In fact, you might not even notice his existence over the weekend. He won't to get involved in any activities in case he pulls a muscle or something. He doesn't know any jokes, he can't booze and he looks like his mum still dresses him. This guy will probably be home before'The Lightweight' because he's supposedly got a headache.