Wednesday Wisdom How To Cause An FA Cup Shock

The FA Cup is no stranger to upsets, which is one of the reasons the oldest cup competition in the world is heaped in romance and tradition. After revelling in the giant killing last night, it got us thinking of other famous instances over the years in the FA Cup. We've picked out some of our favourites and exactly how the minnows made it through.

You don't have to turn the clock too far back to be reminded of a huge FA Cup shock! League One side Bradford City visited Chelsea in the fourth round in 2015 and came away with an unlikely victory.

The Premier League leaders at the time played a strong team and went 2-0 ahead thanks to goals from Gary Cahill and Ramires. At that stage it looked as if it would be an easy ride through to the fifth round for Jose Mourinho's side, but Bradford produced a memorable comeback.

As happened last night, in 2013 a non-league team knocked out Championship opposition at the third round stage.

There was little in the game to suggest that there were 59 places between the two clubs, and shortly after half-time, Alex Lawless scored from the edge of the area to send Kenilworth Road into delirium.

It was an embarrassing afternoon for the four-time FA Cup winners; so much so that Wolves dismissed manager Stale Solbakken shortly after the game.

Next up on the list is Luton Town's very next game that year! The Bedfordshire club went one stop better to knock Premier League opposition out, in the form of Norwich.

The Canaries had good opportunities to win the game through Grant Holt and Leon Barnett, but spurned them. They were made to pay deep into the second-half when substitute Scott Rendell scored at the near post.

The remarkable victory was the first time that a side from the non-league had knocked a top-flight side out of the FA Cup since 1989!

Sutton United may have caused an upset last night, but they'll do well to ever go one better than they did back in 1989 when they knocked out top-flight side Coventry City.

Sutton skipper Tony Rains put his side ahead, but David Phillips scored shortly after half-time. The hosts went ahead again through Matthew Hanlan and hung on to knock out the 1987 FA Cup winners and achieve one of the biggest giant killings in FA Cup history.

Even the might of Manchester United have succumbed to a truly remarkable FA Cup giant killing at the hands of Bournemouth.

Ron Atkinson was in charge of United at the time and the Red Devils had won the competition the previous season. In those days, clubs didn't rest players as they do nowadays; England captain Bryan Robson was present in the United line up.

The game was level at half-time but two goals in quick succession through Milton Graham and Ian Thompson gave a young Harry Redknapp a famous victory! 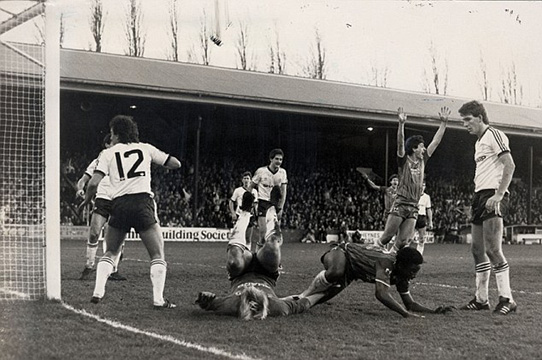