Wednesday Wisdom Be Careful Who You Talk To

The news broke last night that Sam Allardyce had left his position as England manager after discussions with his FA bosses. The whole situation developed within the space of 24 hours, following an undercover report by The Telegraph newspaper.

This got us thinking of some other situations in sport where people have been caught out by undercover reporters. Below are some examples as to why this week's Wednesday Wisdom is'Be careful who you talk to.

Let's start with the here and now. On Monday evening it was revealed that The Telegraph had used an undercover reporter to set up a meeting with Sam Allardyce and his agent in a hotel in London. The reporter posed as a Far East businessman who was looking to make money by bending third-party ownership rules within English football.

In the video, Allardyce explains how there are ways to get around FA rules and regulations; and agreed to work alongside the'Far East businessman' and his'company' for a £400,000 fee. The former Sunderland boss was also filmed criticising FA policy around Wembley, as well as his predecessor Roy Hodgson.

While it's possible to sympathise with Allardyce for the way in which he was tricked, ultimately his greed has led to him losing the job he had wanted all his life.

Early in 2016 the News of the World went undercover to record then England manager Sven Goran Eriksson. Mazher Mahmood had a track record of trapping celebrities in false scenarios, having already done something similar with England rugby star Lawrence Dallaglio and the Countess of Wessex.

The undercover filming quizzed Eriksson on a wide range of issues and had him say that he would leave his role as England manager if they went on to win the World Cup in Germany that year. He also revealed that he was open to the idea of managing Aston Villa or Sunderland if he was paid extortionate amounts.

It is common belief that the shady interview contributed to the Swede's failing as England boss and eventual resignation. 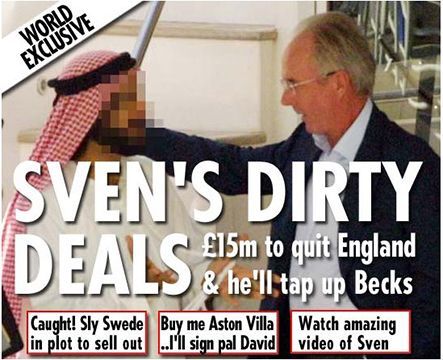 In 2010 another video from the News of the World was released. This time it was snooker star John Higgins at the centre of the controversy. The Scot appeared to agree to fix snooker matches for a six-figure sum and World Snooker acted promptly by banning Higgins from the sport.

Eventually, Higgins was cleared of any wrongdoing, but it was another avoidable incident for a sportsman.

The Pakistani spot fixing scandal was one of the most damning incidents of controversy ever seen in sport back in 2010. Again, the News of the World was at the centre of breaking the news with an undercover report.

The former tabloid managed to set up a meeting with sports agent Mazhar Majeed, who was recorded counting out bribe money from the deal with the Pakistani cricket team. He explained when'no balls' would be bowled in Pakistan's Test match with England, and they sure were.