Wales face the biggest game in their history tonight, with the prize of a place in the Euro 2016 Final on the line! The team spirit and togetherness of the Welsh squad has been apparent throughout the tournament, which made us think what a great bunch of lads they would be to go away with on a stag do. Find out our reasons why below... 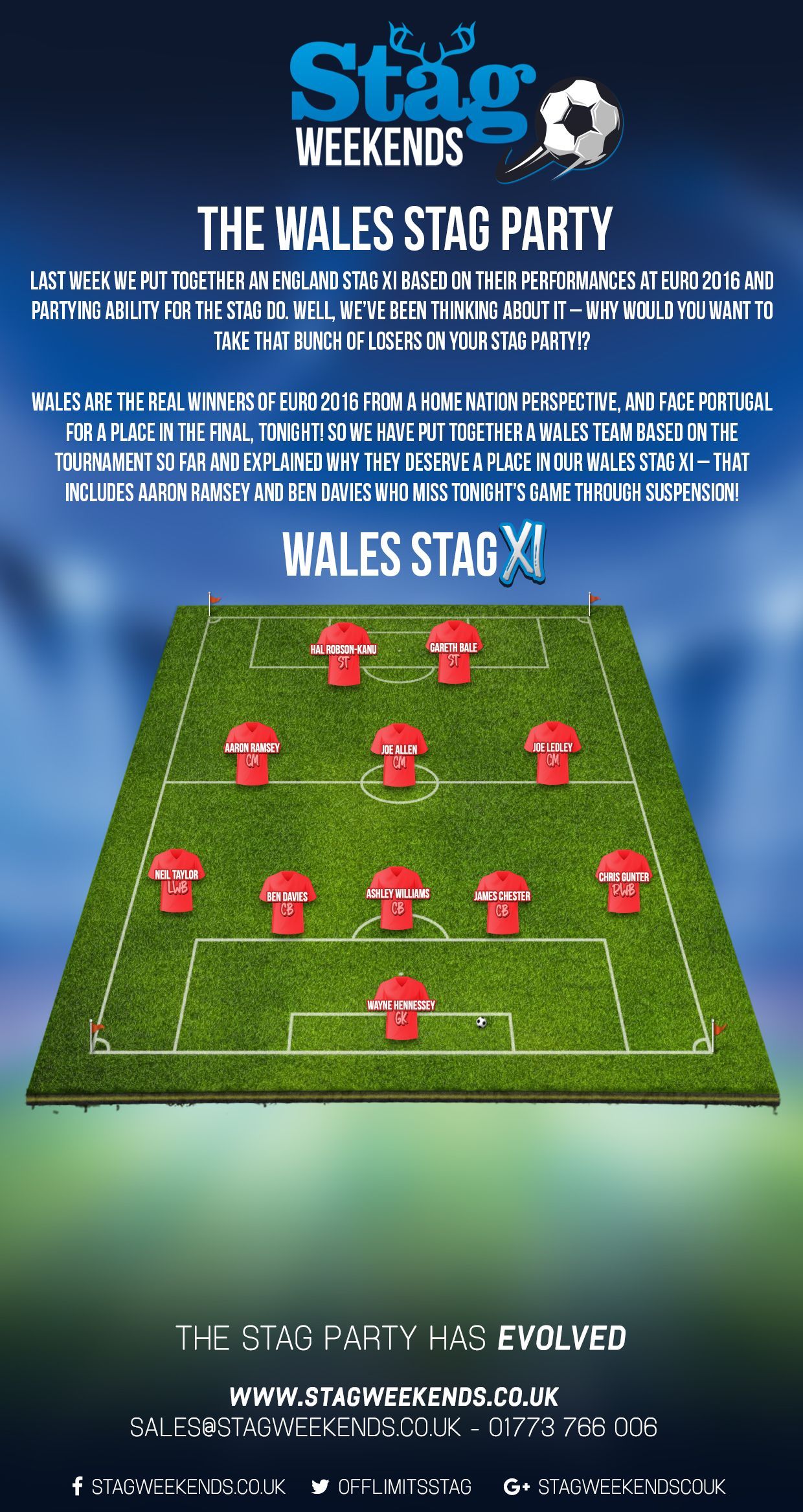 Despite Wales winning their opener without Hennessey keeping goal, Chris Coleman reinstated the Welsh number one for the England game and he's kept his place since. The Crystal Palace'keeper is a calming influence on his back four and commands his area well. You always need a safe pair of hands to carry the drinks on the stag do!

Former Manchester United youth product Chester struggled to hold down a first-team place last season with West Brom, but has had no such struggle in the Wales side! The former Hull defender has earned high praise for his strong performances in France so far, so he should have some'man of the match' champagne to bring to the party!

The Wales skipper has been his reliable self throughout Euro 2016. It looked as though the Swansea defender's tournament may be over when he suffered a shoulder injury late on against Northern Ireland, but Williams is made of tougher stuff, and scored the equalising goal in the Belgium game. No doubt that Williams would be a leader on the stag do!

The Spurs defender offers great balance to the Wales backline, playing on the left hand side of the back three. Davies has played much of his career at left back so is comfortable in bringing the ball out of defence, as well. The former Swansea man spent part of his youth career in Denmark, so will be an experienced traveller on the weekend away!

The ever dependable Gunter has been doing what he does best in this tournament; defending solidly and getting forward to provide an attacking outlet. The Reading defender has claimed a lot of media attention due to Wales' extended stay at Euro 2016 clashing with his brother's wedding'he will be best man via Skype! Gunter has previous experience of being best man for Aaron Ramsey, so would know how to handle a stag weekend!

Like Gunter, Taylor is also missing a big event due to Wales' success at Euro 2016'a Beyonc?© concert! Okay, obviously it's not a big miss in comparison to a sibling's wedding, but a good anecdote nonetheless. It's always good to have some cultured individuals on a stag trip and with Taylor having an Indian heritage; he really is a man of the world!

The Arsenal midfielder picked up his second yellow card of the tournament in the quarter-final win over Belgium, ruling him out of the semi-final, but he still makes our Wales Stag XI. Ramsey has been in great form for Wales in the tournament so far, providing a great link between midfield and attack. His flamboyant hairstyle leads us to think that he'd know how to enjoy himself on a night out!

'The Welsh Pirlo' some have said for his long locks and beard, others have even dubbed him'The Welsh Xavi', but Allen has proven to be a great player in his own right. The Liverpool midfielder has worked tirelessly all tournament and has a fantastic knack of winning the ball back for his side. His boundless energy would make him a stand-out performer on the stag weekend!

You wouldn't know it from his performances, but Ledley fractured a bone in his leg in May! Despite the injury, the midfield enforcer made a miraculous recovery to be included in Chris Coleman's 23-man squad and has featured in every game thus far. Every lads trip away needs a hard man, and here's ours!

The former Reading striker has probably been the surprise hero of Euro 2016 for Wales to now. After scoring the winner against Slovakia in their Group B opener and then scoring a goal against Belgium after a sensational bit of skill, Robson-Kanu's name is on everyone's lips. The forward decided to run down his contract at the Royals and is a free agent, which means he's a free man for this stag trip!

The star man of this Wales side needs little introduction. Bale is the talisman of Chris Coleman's side and announced his name at Euro 2016 by scoring three goals in the opening three games'including two free-kicks. If Wales are to go all the way in this tournament, they will need the Real Madrid forward to produce some magic. He'd be sure to grab plenty of attention for our Wales Stag XI abroad!

Agree that all the regulars deserve to stay in the Wales Stag XI? If not, let us know who would make your Wales Stag XI!